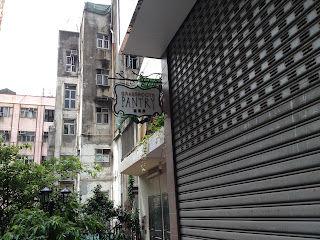 I am notoriously biased about comparing Taipei and Hong Kong's coffee scenes, to the advantage of the former and therefore the detriment of the latter. Taipei deserves all the praise I heap upon it (more evidence of favoritism) but yesterday, I discovered that perhaps I should dig deeper to appreciate the less obvious but nevertheless existent gems of Hong Kong.

I was literally walking down the street (Third Street in Sheung Wan/Sai Ying Pun) when I happened to turn my head left (not unusual, since I am left-handed). I saw a small alley and the sign in the photo above. I must give due credit to the unknown gentleman who was carrying two box lunches in that direction, as well as some tofu in a bag. I felt unnaturally brave and followed him down the alley (not a deep dark one but just a friendly, open cul-de-sac, actually).

At first, I thought the place might be closed since it was Sunday. If it was a typical lunch place catering to professionals, it might be, but it turned out to be a tiny but bustling vegetarian establishment. The top of two floors has one long table, and the ground floor only has four tables for two persons each. Several pairs of customers came in and waited patiently. A good sign.

I was fortunate to come in on time to sit at the table closest to the door and overlooking a small patio with spaces for six other diners. I ordered the restaurant's signature dal, a digestion booster smoothie, and a coffee. I didn't expect much from the coffee, being the third item to be served in the sequence and because good cuisine and good coffee are not always paired together, far from it.

The one word to describe the coffee brewing method of this restaurant is sincerity. The coffee arrived at my table not only piping hot but poured so rapidly that I could practically see black foam at the top. The frothy robustness of the coffee carried through to the flavor, which was so strong that I had to drink the cup quickly.  I also felt the pressure, not from the servers but just innately, to leave as soon as possible to give my place to another set of eager diners. For HKD 28 and feeling completely rushed, I enjoyed the coffee very much.