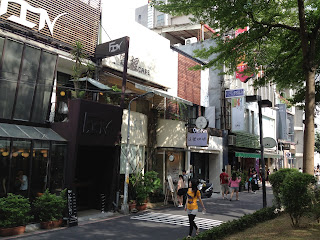 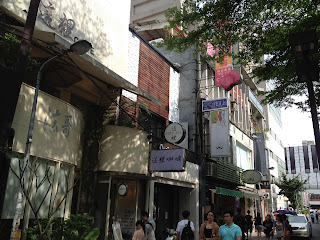 Last week, I was in Taiwan, which I have praised before as a veritable coffee Mecca. I only spent four days there, with the principal mission of attending and presenting at a conference, so my time for gadding about coffee shops was limited. I did try to make lemonade out of lemons by writing up my final presentation notes in one particular establishment, the Ici Cafe (the Chinese name being the translation of the official one, therefore "Here").

I normally don't take photographs of places I visit, but armed with a smartphone (long story, but basically free for being a "loyal customer" so why not?), I captured my delight by snapping the three pictures posted above, before entering the cafe.

Ici has two levels. I did not try peeking into the first floor but rather marched straight up to the second one, determined to find a seat on a Saturday afternoon. My gamble paid off, and I earned the place right next to the coffee bar, discreetly disguised door to the bathroom, and cashier counter. Perfect.

I ordered a "tea set" consisting of a siphon-brewed Mandheling and a banana-chocolate waffle. I do not like to eat sweet foods in substantial amounts so I stared wide-eyed at the ensemble that I received: a Belgian waffle cut into quadrants, arranged in domino-style next to a small dish of chocolate ice cream AND a mini-pitcher of thick chocolate syrup PLUS a footed dish of freshly whipped cream. Oh heavens.

The Mandheling, brewed before my eyes by a calm expert (so critical when one considers how orders were flying violently in during this prime time), was smooth, slightly sweet, and consistent from first to last sip. I did not adulterate it with anything and was surprised how well the porcelain cup maintained the temperature for nearly one full hour. I wish I had the siphon on my table too, but with the waffle dish, my notes, and my cup, I could not be so greedy.

I'll deviate from course and exclaim that the waffle, each greedy bite, was delicious. I tried all sorts of flavor combinations (ice cream plus syrup on waffle, whipped cream only, etc.) to overcome my initial concern that I would be wasting food. My only regret is the Mandheling became a sideshow, subject to periodic sips in order to clear away all the floury goodness.

The atmosphere was typically "posh, highly populated." My neighbors were bizarre -- as much as I disapproved of their conversation, I will not dishonor them by describing it here. The bathroom was much appreciated, being so conveniently located and pristine. Children under 12 are not allowed on the second floor of the cafe, presumably to avoid any lawsuits related to them falling up or down the stairs, but otherwise, cheers to being Here!